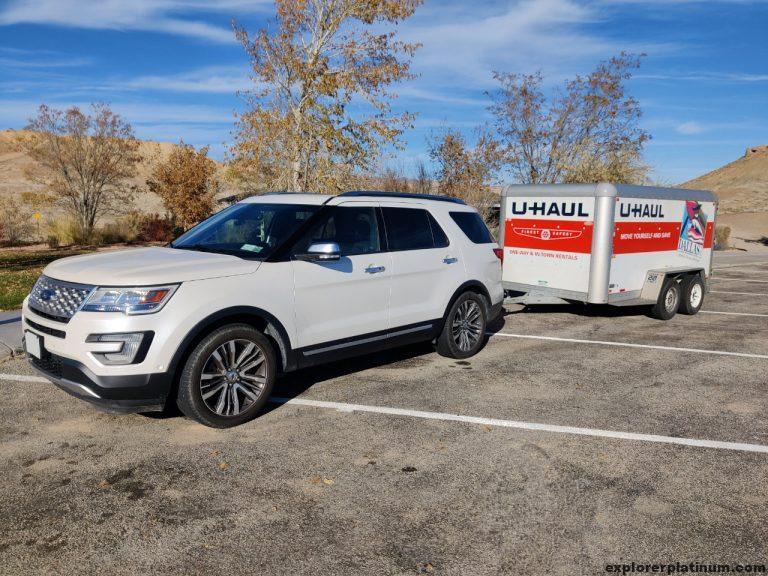 So I’ll be moving back to the West Coast from the East Coast. I thought about the most economical way of moving; from shipping my belongs via FedEx to selling everything on OfferUp/eBay and starting brand new. Eventually, I settled on renting a 6’x12′ enclosed U-Haul cargo trailer. Moving can be a hectic moment in anyone’s life especially driving a trailer cross country. So the best thing to do is to get rid of any surprises by planning. I’ll be sharing with you my experience moving cross country.

During my planning, I stumbled across some interesting information. I found out U-Haul will not rent any trailers to any Explorer before 2011. Mostly due to the Firestone incident and a track record of lawsuits from Explorer owners. I feel like I got lucky since they made exceptions to the 5th generation (U502, 2011-2019) and newer generations. I wouldn’t know what else I would have done because there’s no other rental places that rents one way enclosed cargo trailers.

What did I purchase for this trip?

What’s nice about the Platinum trim is that it comes with features you would never imagine using. When I bought this car, I was not planning on towing. Now that I needed to tow, I found out it comes with a built in tow hitch receiver and the necessary 4 pin connector that U-Haul uses. 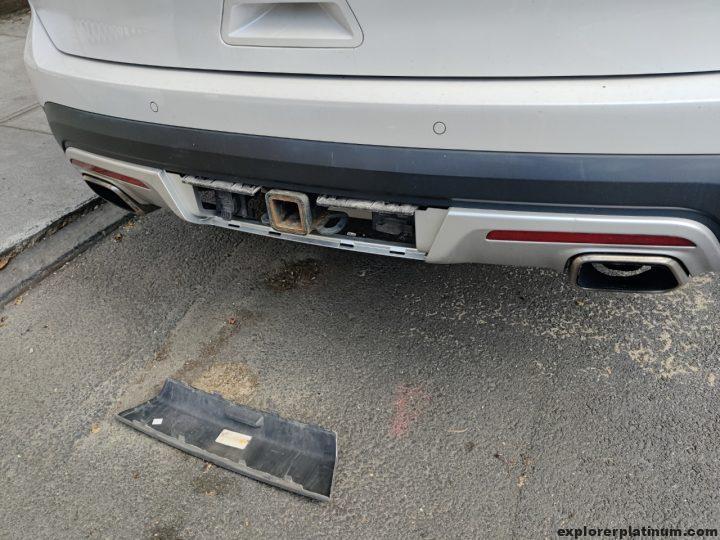 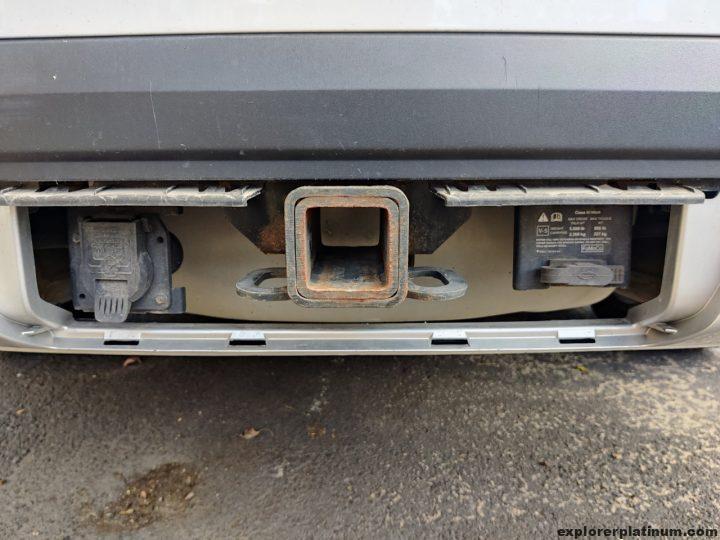 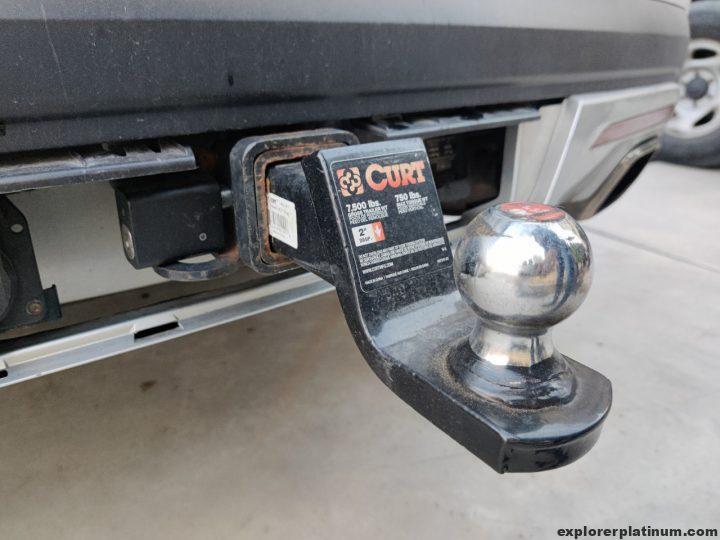 The CURT 45141 trailer hitch mount kit worked out perfect for towing the U-Haul. The kit includes a hitch mount with a 2″ ball, has a 2″ drop and it comes with a hitch lock to prevent anyone from stealing the hitch mount. 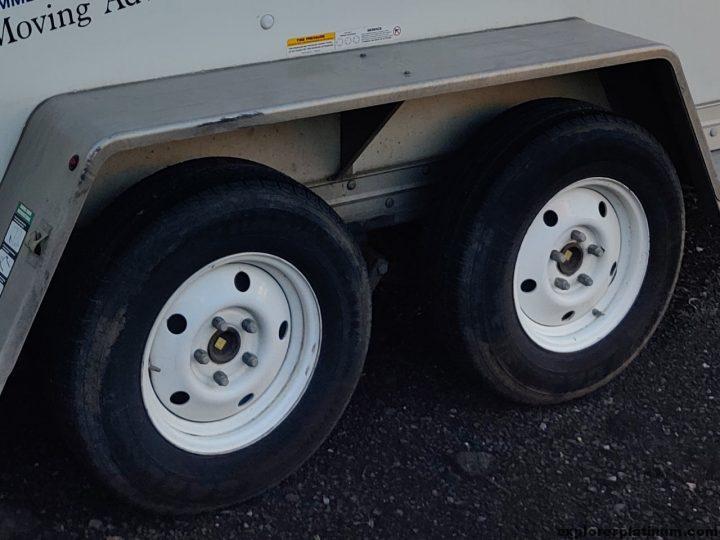 #1 Tandem axles. They are a lot more stable on highway speeds and less prone to sway. 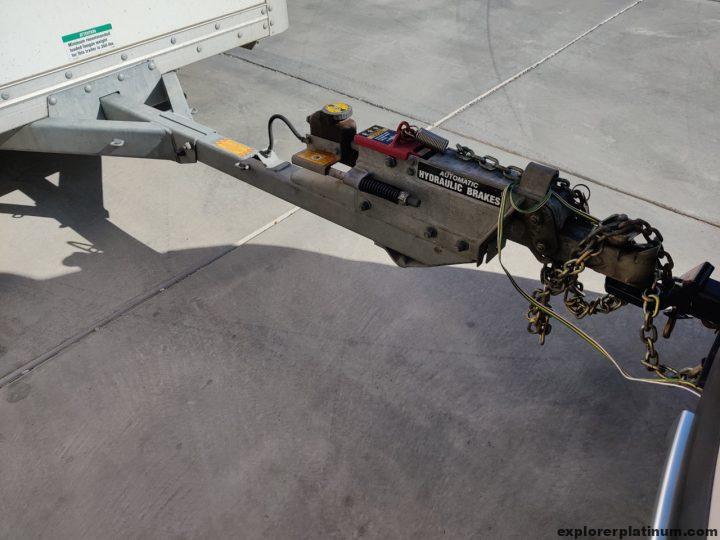 #2 Hydraulic brakes.  6′ x 12′ trailer is the only model that comes with hydraulic brakes (surge brakes). The other two models has no braking mechanism but instead relies on the car’s brakes. Having brakes on a trailers is beneficial for shorter stopping distance, less wear and tear on the car. Hydraulic brakes activate when the trailer hitch gets compressed by the car slowing down, so there’s no need to install a brake controller. A nice feature about U-Haul’s hydraulic brakes is that it has an emergency braking mechanism that’ll activate if the hitch mount disconnects and pulls on the emergency brake chain. 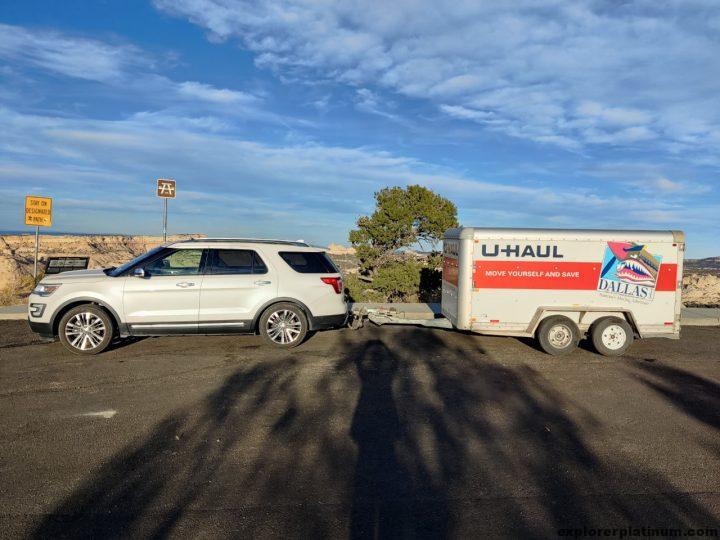 #3 Size. No need to compromise. I was thinking about giving away a few items away such as my computer chair, table and bed. But I was able to fit my whole bedroom and some more! I had space to store a stroller and a few containers of baby clothes for my cousin.

I felt the tandem axles and hydraulic brakes are features that would improve the overall towing experience for long distance driving. I didn’t haul an entire house, just one bedroom and some stuff for my cousin. So size wasn’t the major factor but the cherry on top. 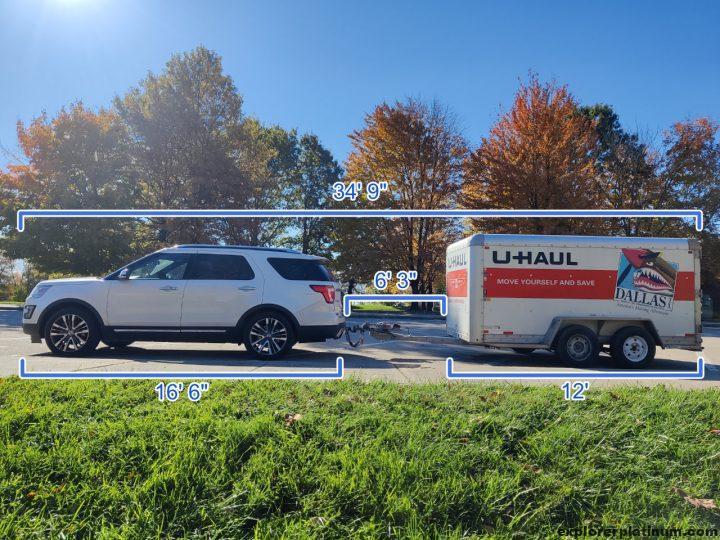 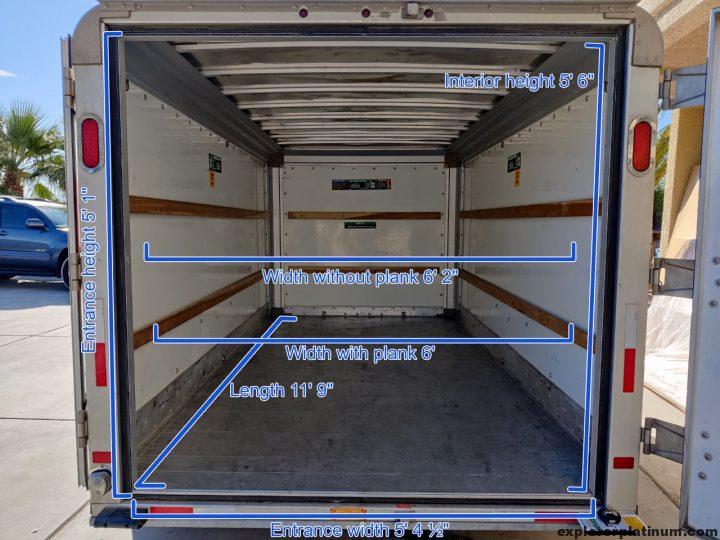 I wanted to know how long my car + trailer would be so I decided to research the information and found no info on how long the tongue of the trailer was. I decided to take these measurements so hopefully it’ll become useful to others. I noticed some of my measurements were different compared to the one on U-Haul’s website so I was a little baffled. If you decide to take your own measurements, let me know what you get.

New York does not allow commercial trucks or trailers on its Parkways. Since U-Haul trailers have commercial plates it falls into the commercial category. I used Hammer and it was really helpful when navigating through New York,  bypassing Parkways and other restricted roads. A small feature, I like about the Hammer app is that it’ll also show you the closest gas station.

Other than Hammer, I also have Waze running on the dash for live traffic information and as a redundancy. I found myself using only Waze once I hit the Midwest. 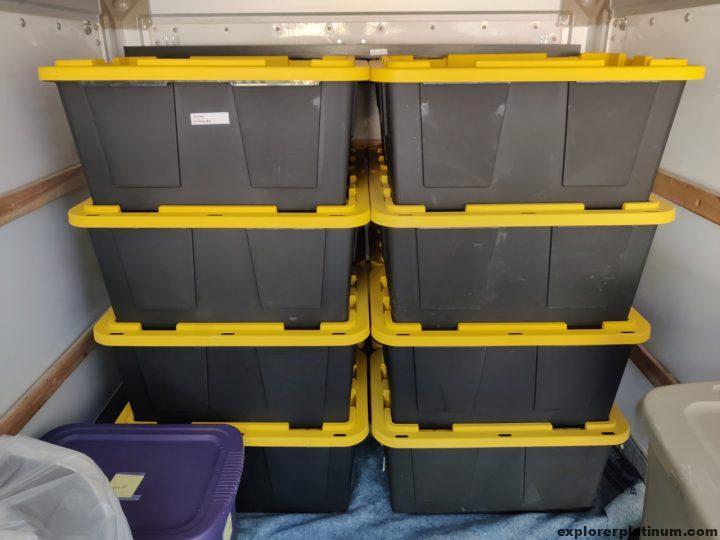 I wanted to make the move as painless as possible. So a month before the move I bought 16 x 27 gallon plastic storage bins from Costco to store important belongings. It’s also helps that they are stackable. So I spent the entire month just slowly organizing and moving my belongings to the storage bins. Everything else that was not important was put into boxes or cheaper bins. 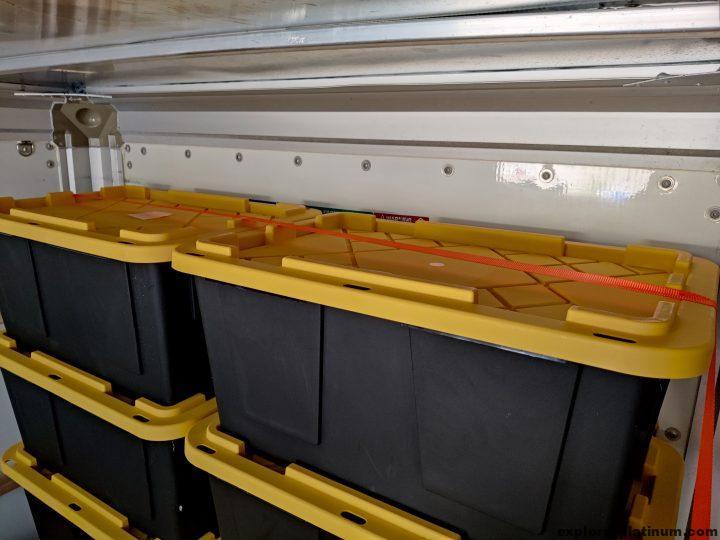 I strapped down all the storage bins with ratcheting straps to prevent them from sliding and moving around when towing.

The U-Haul in New York was charging around $1,400 for a trailer during the summer time. I decided to save money by reserving the U-Haul trailer in New Jersey and then driving it to New York. I was able to save around $600 in doing so.

Don’t be surprised if your reservation gets moved to a different location. Usually they’ll call you the day before to let you know which location they moved it to. Luckily my reservation wasn’t moved too far.

Picking up the trailer

I picked up my U-Haul at a gas station, it seems like this is dealer location and not an official location. The attendant helped me hook up the trailer and gave me general tips. Such as tightening the handwheel on top of the hitch mount if it comes loose. He also advised me on not to taking off the trailer while it’s fully loaded because it’s too heavy to put back on. 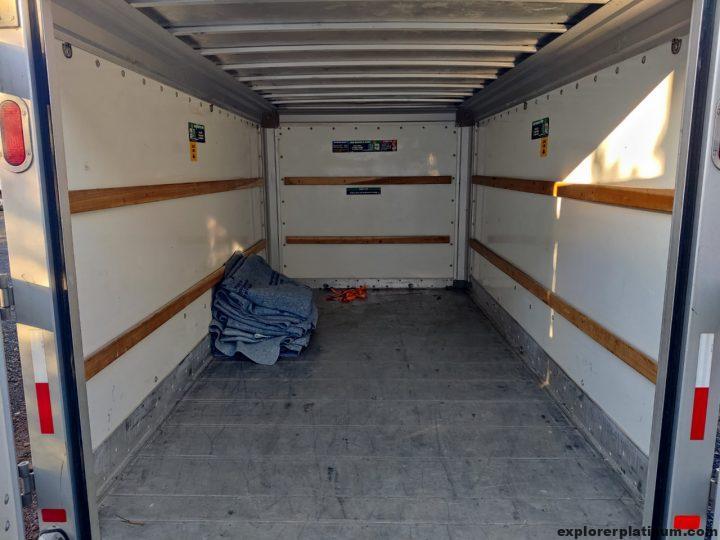 My U-Haul came with some moving blankets and a strap. I ended up using them and then putting them back after.

When the trailer is empty, it bounced and produced a lot of road noise. Imagine an empty aluminum can and some rocks inside. Luckily, the loud noise went away once the trailer was loaded. 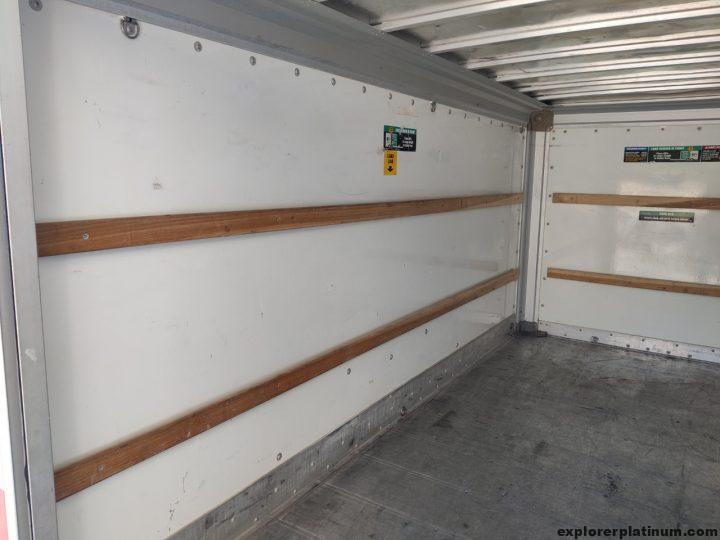 It is really important to distribute the weight properly on the trailer. If done incorrectly, the trailer can sway out of control.  U-Haul has a sign inside the trailer to show where the load line is. 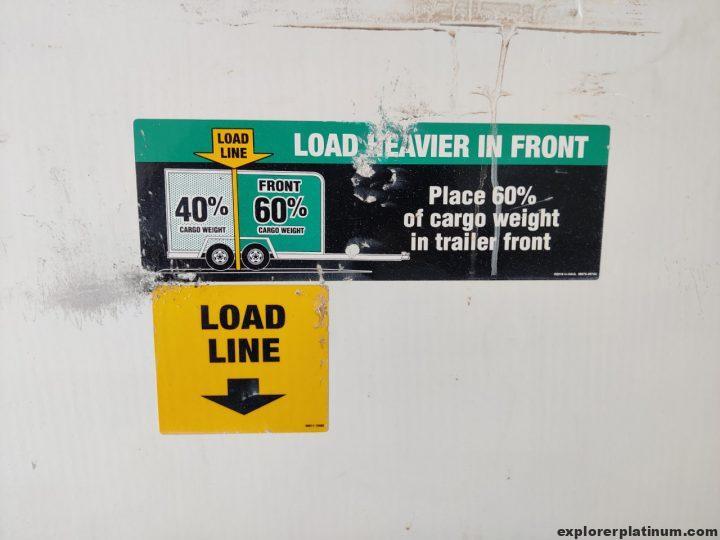 It’s important that 60% of the cargo weight should be allocated to the front.

I watched a few videos of trailers swaying out of control. I also came across a few stories of U-Haul drivers rearranging their their belongings at a rest stops to get the right weight distribution. I knew I had to get it right the first time because I did not want my trailer to sway nor do I want to spend a few hours at a rest stop rearranging my belongings.  The best solution I came up with? Weigh everything and label it, well mostly everything. I labeled my items with post-it notes. 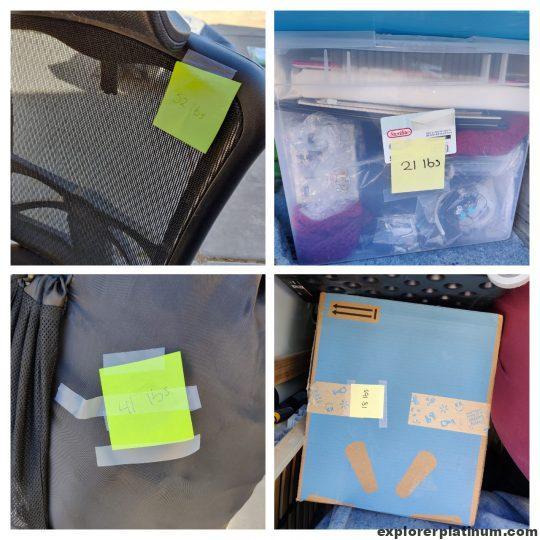 Most objects were too big for my postal weight scale so I decided to weigh them on the bathroom weight scale instead. I would carry the items and then stand on the bathroom scale, after I would subtract my weight to get the item weight. So the formula should look like this:

weight when carrying the item  –  your weight = item weight

I arranged my belongings so that majority of my heavy items were in the front. This took a little more planning but it paid off in the end when I was able make it across country without the trailer swaying.

The U-Haul trailer has all of my life’s possessions. It’ll ruin my entire year if anything was stolen. I decided to take some precautionary measures to safeguard my possessions. 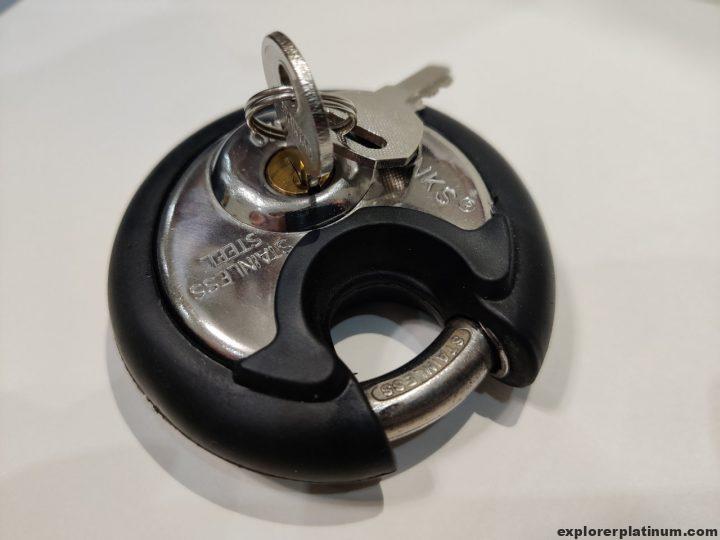 Buy a lock for the U-Haul trailer. At first I bought a standard padlock but I realized it has exposed shackles that’ll make it easy for any thief to cut. I returned the previous lock and ended up buying a discus lock which has closed shackles, making it difficult for any bolt cutter to latch onto. 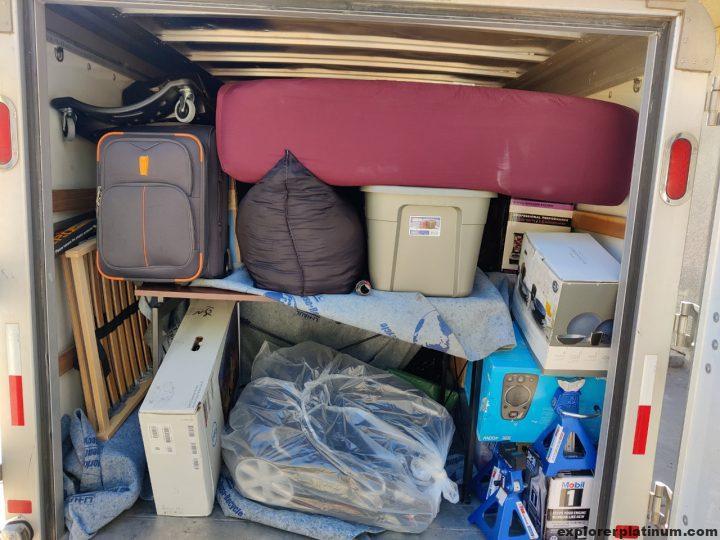 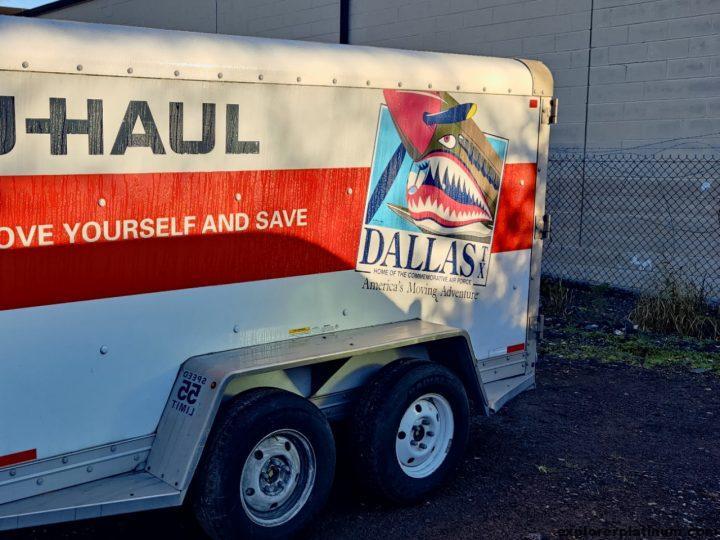 If possible, park in well lit places and against a wall where it’s difficult to open the rear door. 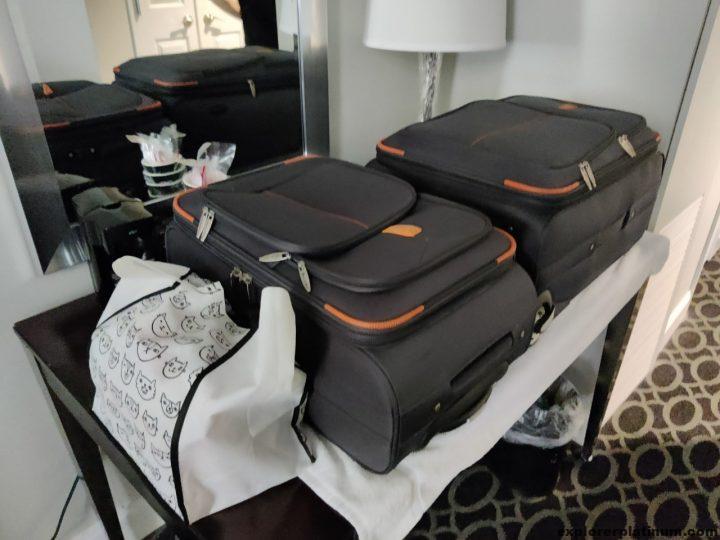 Mitigate loss whenever possible. What happens if someone is determined to break into the trailer? I stored my most valuable items such as jewelry, birth certificate, external hard drives, etc., in a luggage and kept it nearby. No, I didn’t go as far as taking the luggage everywhere I went. If a place felt sketchy, then someone will stay in the car with the luggage or we make quicker trips. It’s best to trust your gut instinct and avoid conflict if possible.

When looking for hotels, I typically stayed in small cities or towns. I would comb through Google and Yelp reviews to see if there are any mention of parking lot theft. You’ll be surprised how many hotels we came across that had multiple reviews of parking lot theft. I went as far as looking at Google Maps to see the layout of the parking lot. Also, I called a few hotels to confirm if they have space for U-Haul trailers.

I have some experience driving trailers so this isn’t my first rodeo. Remember to be patient and plan out everything. Don’t go into a crowded places that’ll make it hard for you to maneuver your trailer. For this trip I did not visit any attractions. I mostly stayed near the highway when getting gas or food. I’ll only venture into a city/town if I’m staying in a hotel.

When towing the trailer empty, it was loud and obnoxious. Luckily the sound went away once the trailer was fully loaded. The 3.5 EcoBoost engine coupled with the Tow Haul Mode made towing a simple task. The 3.5 EcoBoost had enough power so I never had issues going up any hill. When in Tow Haul Mode, I noticed it uses engine braking to help slow down the car. This is the first time I’ve experienced this and thought it was nifty. 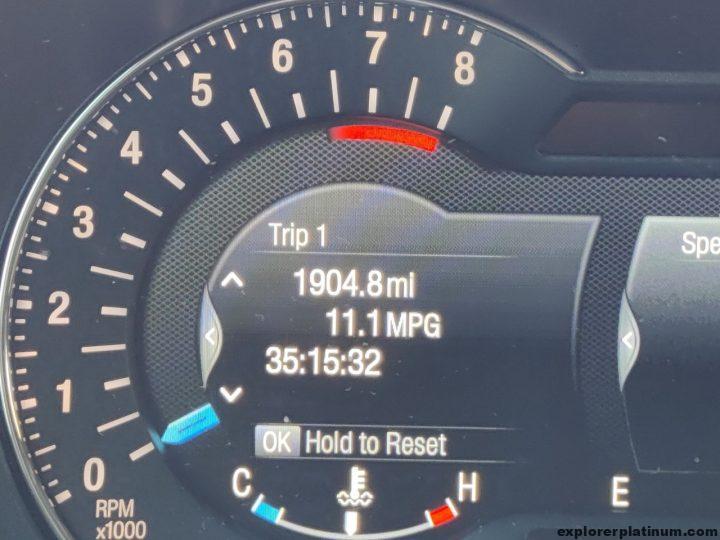 Expect to get horrible MPG. I averaged around 11 MPG the whole trip. I knew beforehand the MPG would be horrible so I bought 2 x 5 Gallon Jerry Fuel Cans. 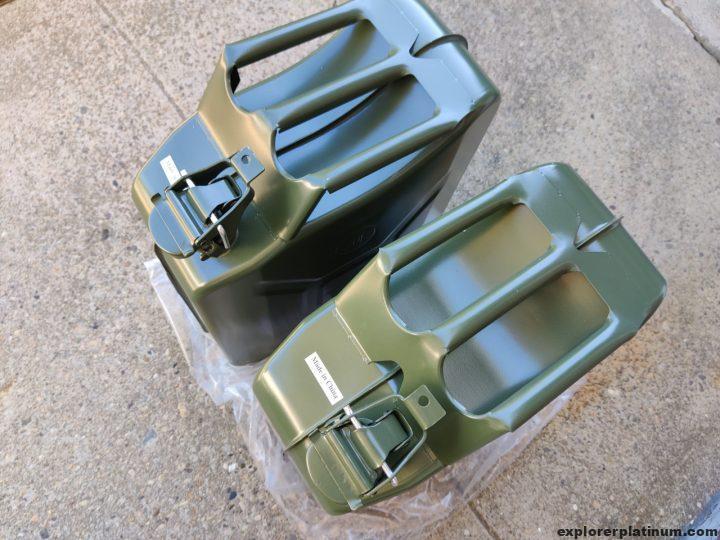 I bought these Jerry Cans incase I ran out of gas. Since my car gets 11 mpg with a trailer, these gas tanks should provide me with 110 miles of distance to go to the nearest gas station. Luckily I didn’t need to use these Jerry Cans. My Hammer gps app would always show a gas station within 10 miles most of the time. Typically I refilled my gas tank around the 40% to 25% range. If I know there’s no major cities nearby, I’ll usually refill around the 40% mark. This might sound excessive to some but I use these stops as an opportunity to stretch. Driving fatigue is horrible and puts you in dangerous situations, so I try to stop often. If I know I’m within driving distance of a major city I’ll let it go down to 25%. There was one stretch of drive on the I-70 through the Utah desert where there were no gas station for 80 miles but the gas tanks provided a sense of relief if I did happen to run empty. 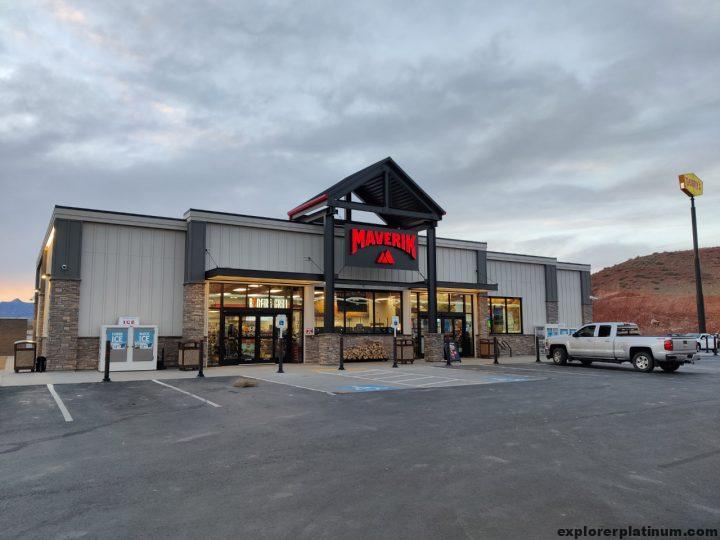 Initially, I dreaded driving a trailer cross country but with lots of research and planning everything went smooth. I honestly wouldn’t do anything different since it went so well.  Make sure you stop by a Maverik if you see one. It has almost everything you want at a gas station including clean bathrooms. If you also moved across country, let me know how your experience went!

8 thoughts on “How to: Hauling a 6’x12′ U-Haul cargo trailer across the country”