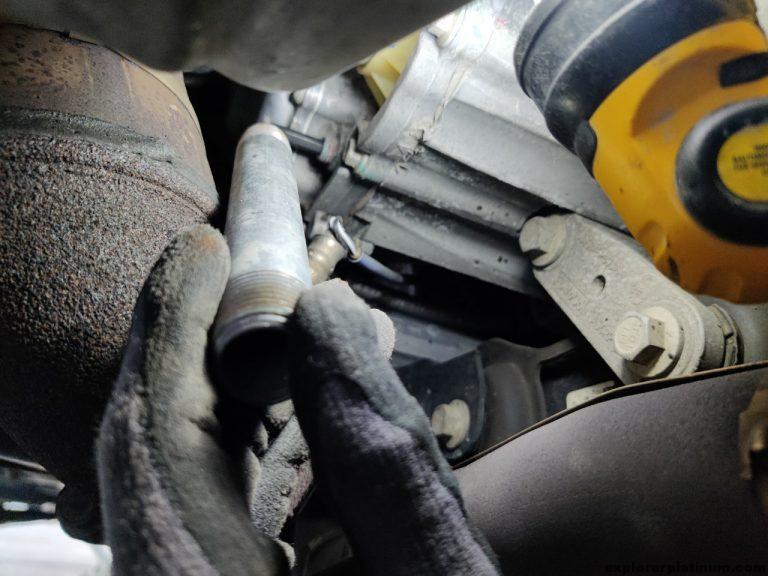 Ironically, the PTU fluid in my 2017 Ford Explorer Platinum is considered a lifetime fluid and does not need to be changed for the life of the vehicle. But when researching, owners of the Explorer recommend changing the fluid every 30k miles. I came across a few post where they mentioned the fluid was black and sludgy when performing a drain and fill past 50k. So at 55k, I was concerned that my PTU would fail during my cross country road trip.  Off I went on a journey to change out my PTU fluid. I’ll be breaking the guide into two parts, draining the PTU and filling the PTU.

Jacking up just the front should be enough. 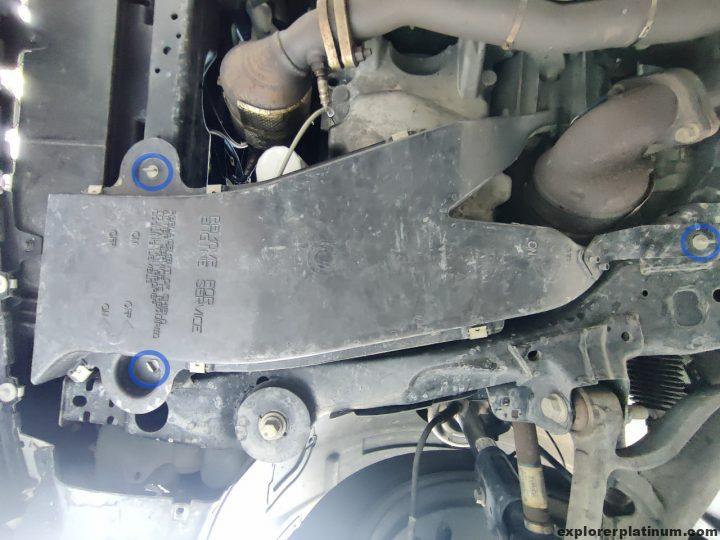 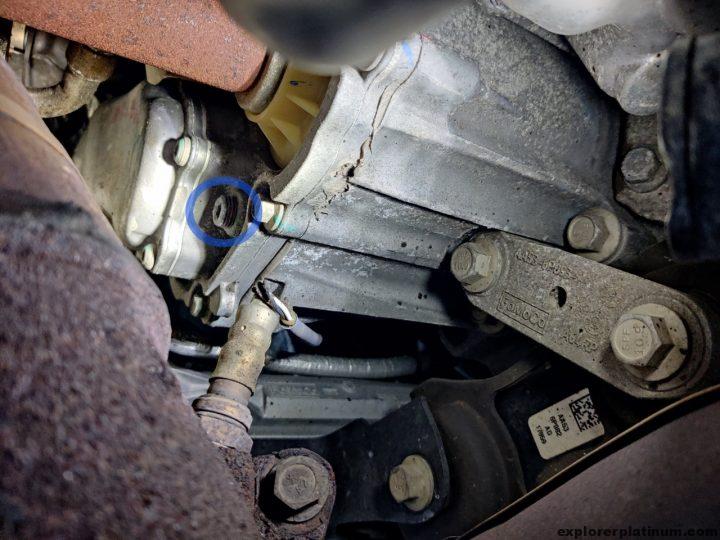 The drain plug should be next to a catalytic converter and above an O2 sensor. 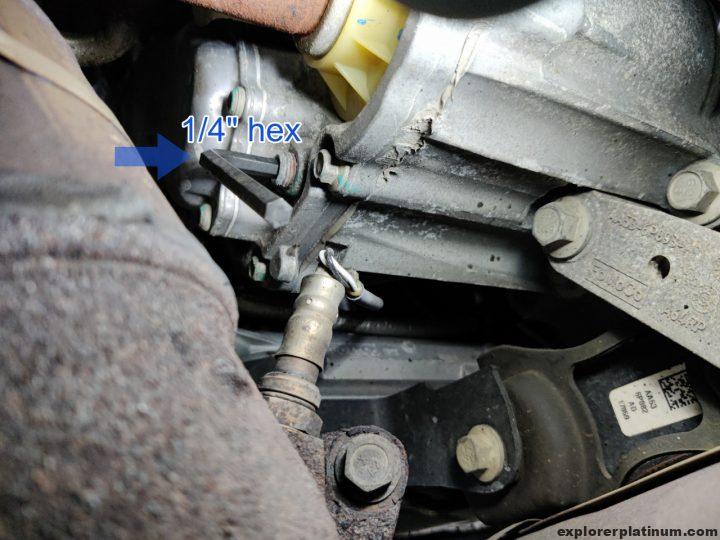 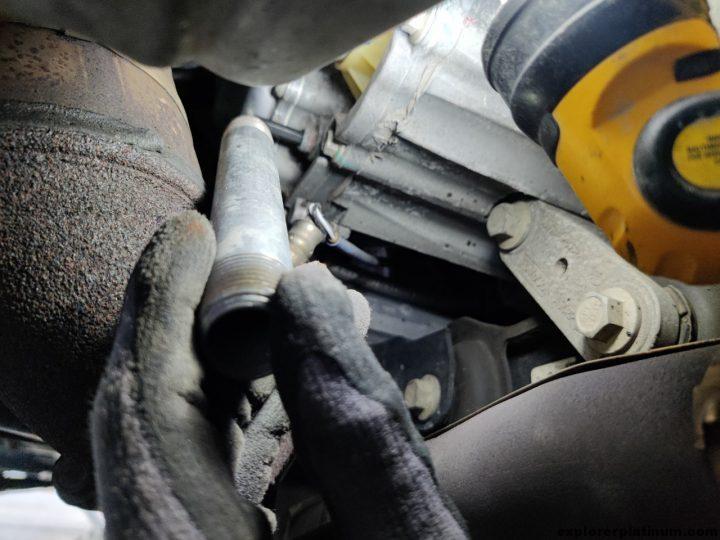 My drain plug was a little rusted in so I used a gas pipe fitting on the hex wrench to break it free. 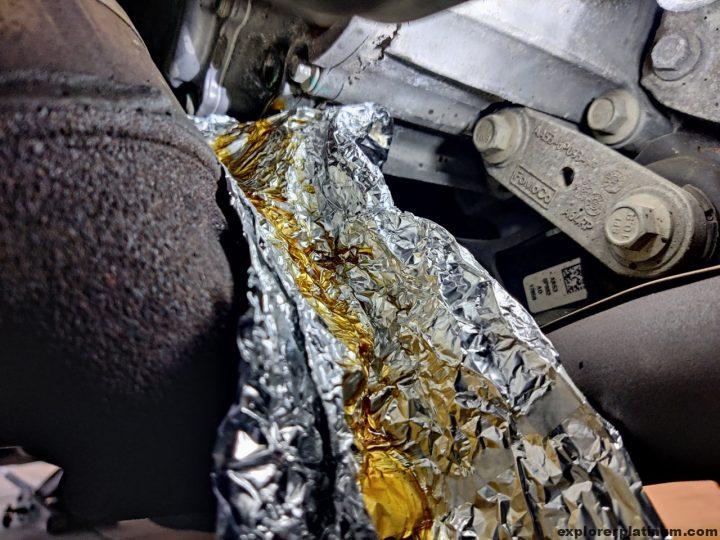 To guide the oil down, I used an aluminum foil to create a slide for the PTU fluid. I sighed relief when I saw the fluid was golden brown color. 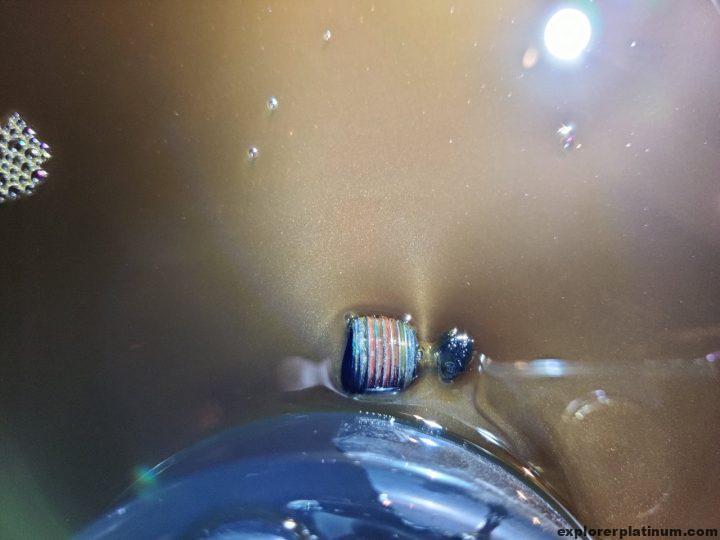 I’m glad I was able to perform this maintenance at 55k. I wish it was changed at 30K but I didn’t own the car then.  See all those specks in the fluid? It doesn’t show in the picture that well, but it looked like someone dumped really fine glitter into the fluid. 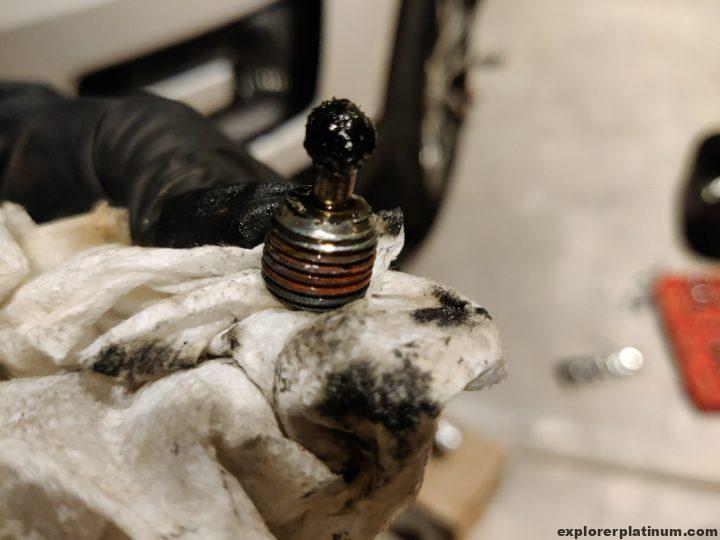 All the metallic gunk on the end of the drain plug. Don’t be surprised to find more of this gunk stuck near the drain hole. 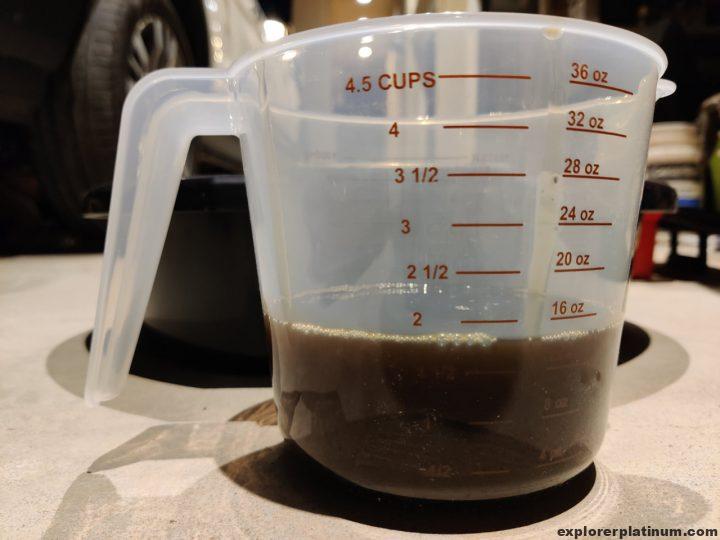 14oz of fluid was drained.

Step 6. Put back the drain plug.

Once it’s done draining, I applied some Permatex 59214 High Temperature Thread Sealant onto the drain plug and reinstalled it.

I didn’t see a need to be under the car anymore so I reinstalled the lower shield in Step 1.

I actually struggled on this part for a good few hours. I was going towards the route of extending the PTU vent tube but I could not for the life of me take off the plastic vent breather cap from the top of the engine bay. So then I decided the next step would be to disconnect the entire hose by yanking it but it wouldn’t budge either. I was using all my strength tugging the hose out from the top and from the ground but it would not come off the metal vent barb. But by chance I discovered it was actually easier to extend the hose from the ground. 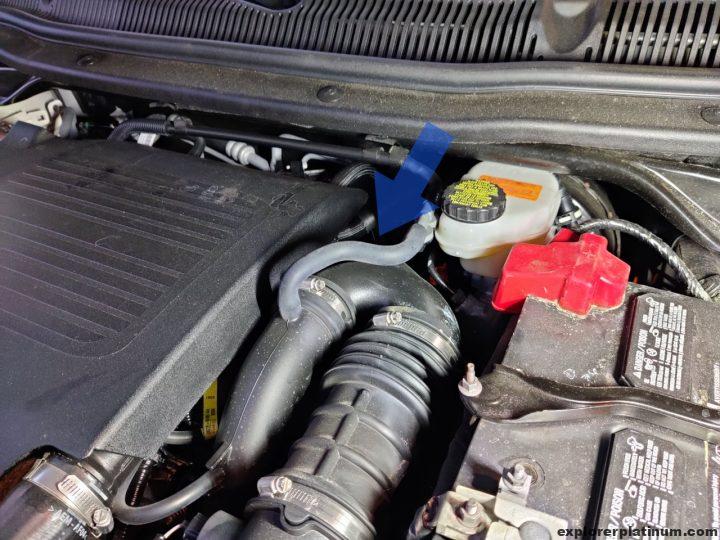 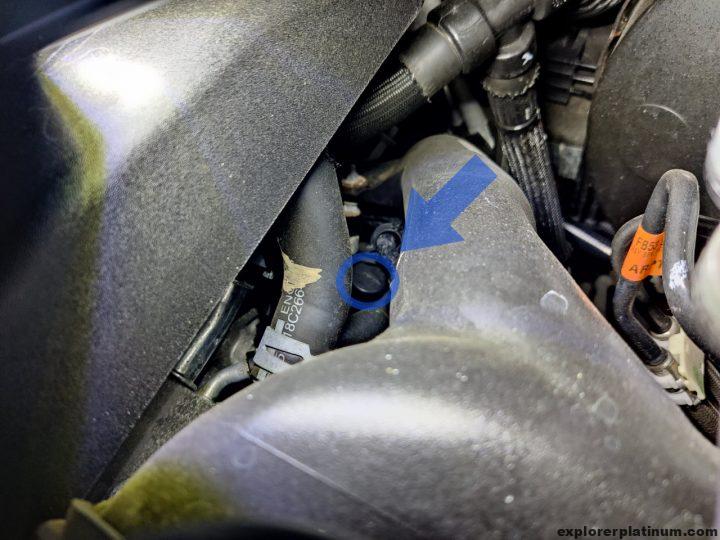 Step 1. Disconnect the hose fastener from the engine block. 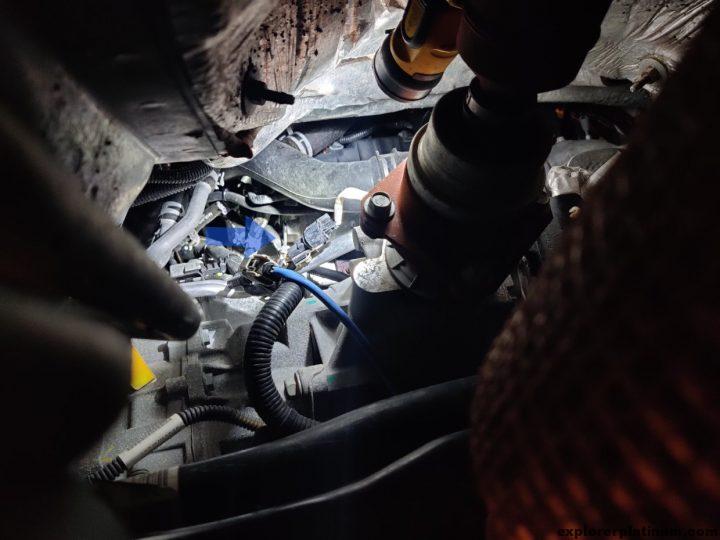 Here’s a far out picture of the fastener that holds the vent hose pipe. To access this area I had to go under the car and move under the front of the drive shaft. 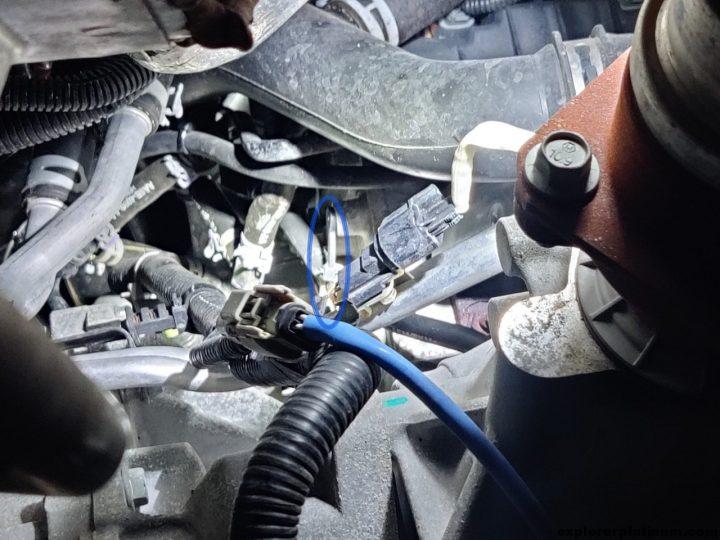 A zoomed up picture of the fastener. I was able to use a flat head screwdriver to pry it off. I was surprise how easily it came off. 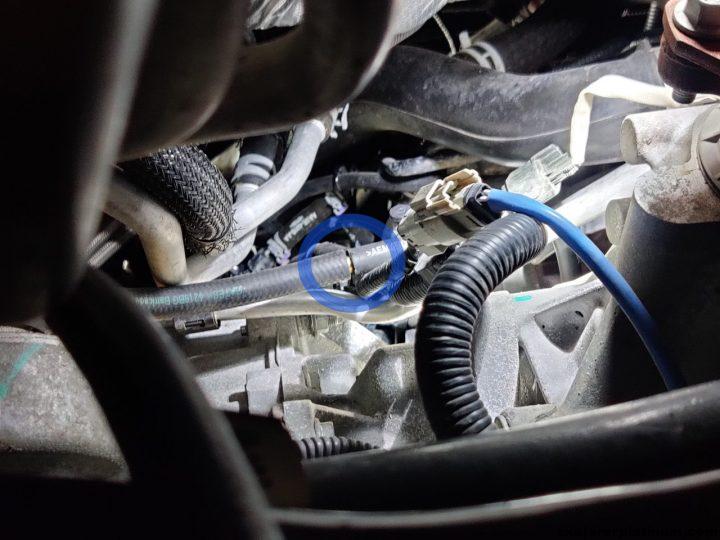 Now that the hose is open. I inserted the 5/16″ x 5/16″ barb and connected 3′ of fuel line to complete the extension. After, I routed the extended fuel line to the engine bay. 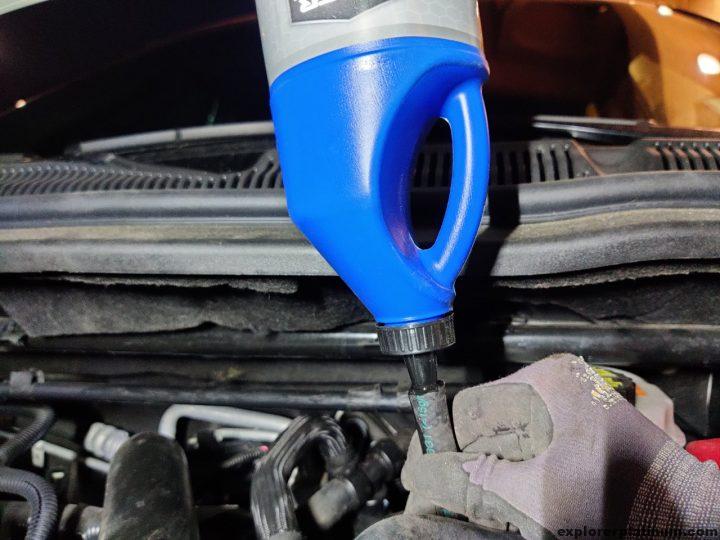 Since I drained 14oz I’ll be adding 14oz back. Luckily the SuperTech 75W-140 fluid bottle has a coned tip that I was able to insert into the 5/16″ hose. Had to use a hose clamp to keep the hose in place. The fluid will move super slow so I used a wire to hold up the bottle and let it patiently drip and occasionally checking up on the progress. While it’s filling up, I decided to utilize this time to clean up my mess and put everything away.

Step 5. Reinstall the plastic vent hose breather cap and zip tie it down. 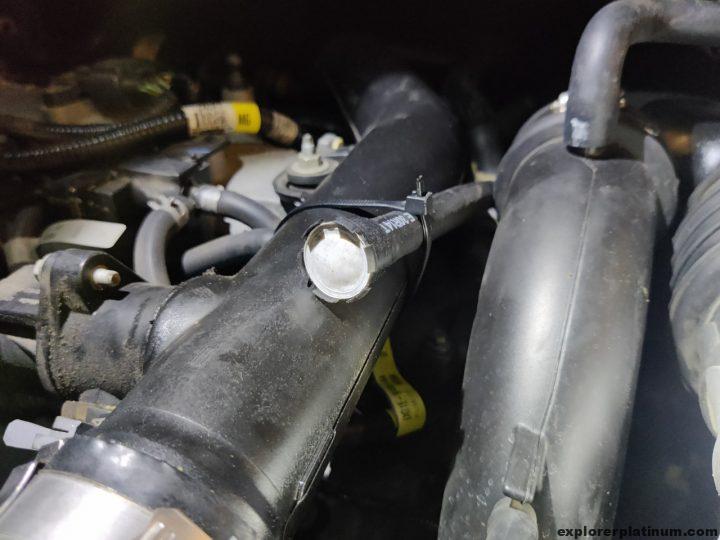 Wondering what happened to the top cap? I somehow lost the cap when attempting to pull it off. I spent a good hour looking for the cap but couldn’t find it.  I’ll be replacing it in the future but no rush in replacing it now since this will be under the engine cover.

Once I verified 14oz has drained from the bottle, I installed the vent breather cap and zipped tied the hose to keep it secure.

Overall, changing PTU fluid made me miss how easy it was to maintain a Nissan Xterra. The Explorer PTU does not come with a fill hole. Depending on the year, some Explorers don’t even come with a drain hole, luckily my 2017 Ford Explorer Platinum has one. This entire process took a good 4 hours. Majority of the time I was trying to figure out how to remove the vent hose breather cap. I’m sure if I were to start from the beginning with my current knowledge it’ll take me no more than 30 minutes. My next drain and fill should be even more simple because everything is already setup.  I’ll provide an update when I do!